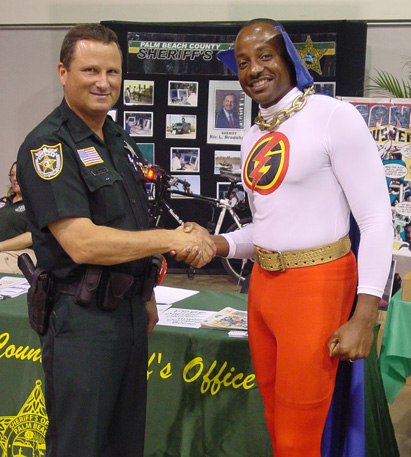 As gangs continue to riddle the country with death, drugs and blood-spattered violence, cartoonist Dick Kulpa has decided to re-energize a program with a rich history of positive results. GANGBUSTER!

This boy could not put Gangbuster down once he started reading it, not the first time that’s happened! Pic taken in 2010!

Originally issued in 1986, the Gangbuster comic book project continues to be distributed by several police agencies, albeit on a small scale (and one within reach of Kulpa’s limited resources.)

“Police agencies who’ve distributed Gangbuster see this as an ideal “bridge-builder”, a way to break the ice when communicating with kids,” Kulpa says. “A comic book is non-threatening and looks downright fun. Upon its reading, however, is when Gangbuster’s ‘Trojan Horse’ value emerges — kids learn obvious, common sense lessons as to why gangs are bad for them.”

“In its short and sweet 8-page format, these lessons are easily absorbed,” Kulpa added.

This article appeared in the Rockford, Illinois daily paper back in 1986. 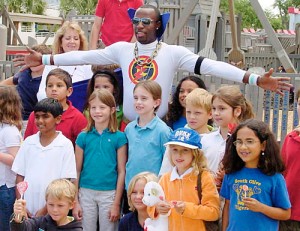 Gangbuster met with phenomenal acceptance in his initial Rockford, Illinois debut, and subsequent surveys distributed by youth-gang counselors came back with an extraordinary “thumbs up” from respondents in ALL various age brackets.

“My goal with Gangbuster was and is to offer alternatives to kids,” Kulpa says. “They’d draw pictures of the character, write stories, even warn each other about gangs.

One group of young entrepreneurs actually scarfed dozens of the free copies and sold them in the streets for 75 cents each! When kids pay real money out, THAT spells acceptance,” Kulpa said. “75 cents was the going price of a comic book back then. I actually looked the other way for a while…beats seeing ’em sell drugs!”

Dick Kulpa with Gangbuster at a sheriff’s booth as Captain Cartoon. “Shoot me from my best side,” he asked.

“I could fill a book with all the good points and experiences coming out of Gangbuster,” Kulpa says. “But on the downside, it cannot be me spearheading this — I’m an old white guy. Someone needs to wear the suit — a role model — someone the kids can relate to. And I’m talking ‘kids.’ Get ’em while they’re young,” Kulpa advises.

“We’ve all heard about how an ounce of prevention is worth a pound of cure.”

But Dick admits he was surprised when a New Jersey detective recently advised him that a couple of “tough cases,” older, entrenched ex-gang members he’d been working with, enthusiastically embraced Gangbuster.

As part of “Gangbuster Week” kids drew pictures of their favorite new superhero.

Several L.A. gang counselors also revealed a connection with Gangbuster. They personally identified with the superhero, and said so. “That’s because these people are REAL heroes!”

“Gangbuster was stuffed full of info by youth gang professionals, as I merely offered myself up as the ‘chef.’ They provided the meat and potatoes and I cooked it up,” he said. “Upon completion, these counselors were handed the pages and asked that they ‘tear it apart ’til it’s right.’ They did, and nobody’s criticized it ever since.”

By far the greatest hurdle with Gangbuster? “Agencies flat out told me — ‘no money,'” Kulpa reveals. “I’ve since posted a free Gangbuster E-book online. When I developed Gangbuster in 1986, I DID secure a corporate sponsor. Not hard to do…surely there remain some public-spirited corporations out there.”

“Like anything else, Gangbuster is a program which needs to be worked,” Kulpa adds. “Done right, they’ll (results) be dramatic. Some question how a ‘comic book’ can work, but HEY — ‘comic book’ is a misleading term. This is a picture book with words. It communicates — effectively. Gangbuster reaches kids on their level, and kids WANT to read it, end of story. I’m a writer-artist, not a salesman!”

The choice we face is dismal, Kulpa adds. “Either get creative with this or something similar, or turn into a police state. I’ve seen ‘police state’ tactics implemented in several cities, and they do seem to work — at least on a temporary basis. Gangbuster, however, works over the long haul, and a whole lot better. It aims for the root cause.”

“I’ve kept things on hold for awhile,” Kulpa admits. “When someone approaches me wanting to do this right, I’ll be all ears. But I know this: The emergence of a ‘live Gangbuster’ in 1986 caught me by surprise — he was actually the gang agency’s doing. The kids’ subsequent and overwhelming acceptance, coupled with those other kids selling the books, told me that a whole new culture was actually possible. What better way to diminish a detrimental gang culture than with a colorful, creative and opportunity-bulging Gangbuster comic counter-culture?”