THIS JUST IN: Interview with Dick Kulpa.

What would you expect from the publisher of the humor/satire CRACKED Magazine during this Presidential Election. Of course, parody posters featuring the world’s greatest parody subject ever, Donald J. Trump, and drawn by that cartoon billboard king Dick Kulpa himself!

HOWEVEr, there is a slight twist: these are PRO -Trump spoofs…NOBODY does that! (Well, most nobody, anyway.

Now that Donald’s dumped his ding-dong campaign manager, maybe he’ll know when “not to be Trump,” stop alienating the real people (who want to vote for Mighty Mouth but are afraid to) …and win this election.

See all three collectible Trump parody posters on Dick Kulpa’s website! Here is another…just sold two of this one on the spot as I walked into an office building;-)

People just gotta have it! 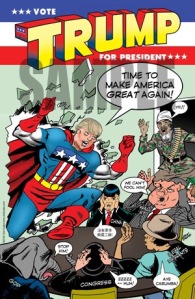 This poster is based on Dick Kulpa’s 1984 cartoon literature which carried every precinct it was delivered in and won him tvat big upset election.

This cartoon carried every precinct it was delivered in.

(Dick Kulpa is the publisher of The South Florida Fun Times, Publisher of Cracked Magazine, former editor of Weekly World News, Cartoon Billboard King and creator of Batboy. A political cartoon commentator and three-time election winner himself, He’s also blind as a bat and can be found drawing caricatures as Captain Cartoon outside restaurants with a big tip jar at his side. Such is life.) 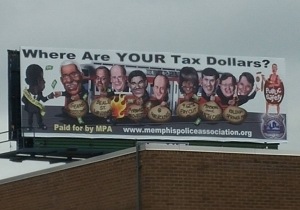